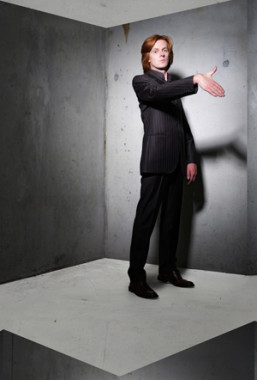 Enno Poppe, born in 1969 in Hemer, Germany, is one of the most important young composers of new music in Germany. He is a conductor since 1998 a member of the ensemble mosaic. Poppe studied conducting and composition at the University of Arts in Berlin, among others Friedrich Goldmann and Gösta Neuwirth. This was followed by further studies in the areas of sound synthesis and algorithmic composition at the Technical University of Berlin and at the Center for Art and Media in Karlsruhe. In addition to scholarships – among others, the Akademie Schloss Solitude and the Villa Serpentara in Olevano Romano – he was awarded the Boris Blacher Award 1998, the composition of the City of Stuttgart 2000, the Busoni Composition Prize of the Academy of Arts in Berlin in 2002, the grant from the Ernst von Siemens Music Foundation in 2004, the Schneider-Schott Prize in 2005, the price of Kaske Foundation 2009 and the price of the Hans and Gertrud-Zender Foundation 2011th. After two years of teaching at the Hochschule für Musik Hanns Eisler in Berlin, Enno Poppe gave lessons multiple times at the Darmstädter Ferienkurse between 2004 and 2010 as well as the seminars for composition of the Impuls Academy Graz/Austria. He is member of the Academy of Arts Berlin, the Academy of Sciences and Arts Düsseldorf, and the Bavarian Academy of Beaux Arts Munich. On a worldwide scale, his works are performed by almost every well-known ensemble and at most of the festivals for Contemporary Music. His works have been commissioned by Wittener Tage für Neue Kammermusik, the Berliner Festwochen and the Berlin Festivals Ultraschall and MaerzMusik, ECLAT in Stuttgart, musica viva and the music theater biennale in Munich, as well as the Donaueschinger Musiktage and the Salzburg Festival. Enno Poppe lives and works in Berlin since 1990. His works came out on CD in numerouse recordings, amongst others with ensemble mosaik, and are published by RICORDI Munich.