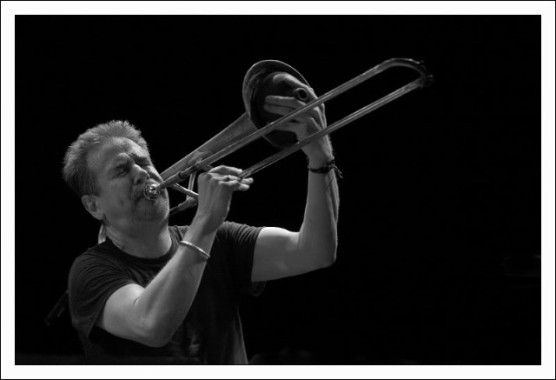 Born in Newark, NJ, Steve Swell has been an active member of the NYC music community since 1975. He has toured and recorded with many artists from mainstreamers such as Lionel Hampton and Buddy Rich to so called outsiders as Anthony Braxton, Bill Dixon, Cecil Taylor and William Parker. He has over 40 CDs as a leader or co-leader and is a featured artists on more than 100 other releases. He runs workshops around the world and is a teaching artist in the NYC public school system focusing on special needs children.

Swell has worked on music transcriptions of the Bosavi tribe of New Guinea for MacArthur fellow, Steve Feld in 2000. His CD, “Suite For Players, Listeners and Other Dreamers” (CIMP) ranked number 2 in the 2004 Cadence Readers Poll. He has also received grants from USArtists International in 2006, MCAF (LMCC) awards in 2008 and 2013 and has been commissioned twice on the Interpretations Series at Merkin Hall in 2006 and at Roulette in 2012.

Steve was nominated for Trombonist of the Year 2008 & 2011 by the Jazz Journalists Association, was selected Trombonist of the Year 2008, 2009, 2010 and 2012 by the magazine El Intruso of Argentina and received the 2008 Jubilation Foundation Fellowship Award of the Tides Foundation. The Downbeat Critics Poll selected him for the Trombone category in 2010, 2011 & 2012.