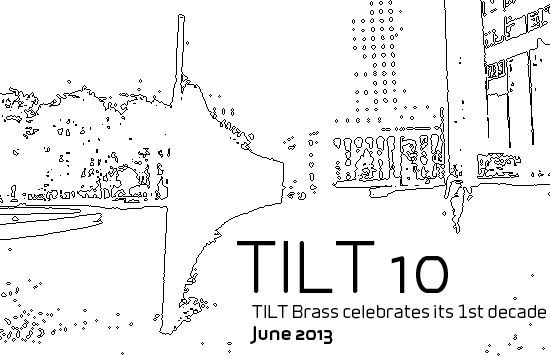 Venues and presenters include ISSUE Project Room (6.6) and Roulette (6.27), a return to The Lake at Central Park (6.21), and as part of Lower Manhattan’s annual River To River Festival during both the Bang on a Can Marathon (6.16) and Ecstatic Summer (6.29/30) events.

The range of repertoire heard during TILT 10 Festival mirrors the breadth of its locales, from acclaimed recent work by Nate Wooley and John King to a batch of newly commissioned pieces by local and international composers including Mario Diaz de Leon, Dave Douglas, Lainie Fefferman, Andrew Hamilton, Reggie Pace, Filippo Perocco, Ryan Lott, Holly Herndon and TILT Director Chris McIntyre – a total of 9 world premieres in all (and a US premiere from Enno Poppe)! [See Composer Page]

TILT Brass is honored to have been selected as a Spring 2013 Resident Artist at the prestigious Baryshnikov Arts Center where the musicians will prepare this ambitious month of events.

TILT 10 Festival  is being developed in part during a residency at the Baryshnikov Arts Center, New York, NY. In addition to generous private donors, TILT 10 Festival is made possible in part by New Music USA’s Cary New Music Performance Fund, and with support by Culture Ireland as part of Ireland’s EU Presidency Culture Programme 2013.