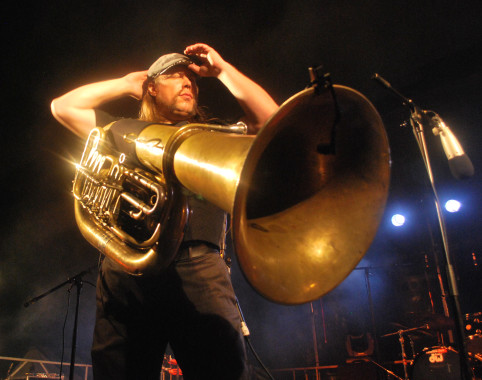 Contemporary Tuba artist “TubaJoe” Exley is one of the single most diverse and widely experienced tuba players known.  CBS New York stated that Joe has performed with “hundreds of groups in hundreds of clubs in the hottest cities.”  Fearless Radio called him “truly virtuosic”, while All About Jazz called him “seductive”, and Obscure Sound called him “prodigious”. The New Orleans Times-Picayune said his “throbbing” grooves were such that “you can’t not dance with abandon” and KUT Radio in Austin, Texas said “Exley renders the tuba an instrument of funk on par with the Fender Jazz Bass.” TubaJoe has been heard on the major networks of ABC, CBS, NBC, MTV, PBS, BBC, NPR and Bravo!, and has appeared on over 60 albums, movie, TV, and video game scores, as well as on TV and radio across Europe.  Joe has performed in Carnegie Hall, Lincoln Center, Radio City Music Hall, Orchestra Hall in Chicago, and in rock and jazz clubs worldwide. TubaJoe is an endorsee of Parker Mouthpieces and Accord Cases.